Gemüseproduktion Zorbau is one of the production locations of German fruit & vegetable production and marketing enterprise, Gemüsering Stuttgart. Based in Lützen near Leipzig, the existing 7.2 ha tomato greenhouse has HPS throughout and is one of the largest fully lit greenhouses in Germany.

To fulfil a major new contract to produce German grown Piccolo tomatoes and other premium varieties, a further 1.36 ha was added to the greenhouse in 2020, and the decision was made to light the new crop with LED.

Gemüsering Stuttgart is the first company in the “fresh vegetables and fruit” sector committed to consistently pursuing climate neutrality. The Zorbau greenhouse already draws all is energy requirements from an innovative micro-grid that delivers more sustainable and resilient power. But the cost of this energy is still very high compared to other countries and so the energy efficiency of all greenhouse operations needs to be as high as possible.

“To deliver the year-round quality required for the new tomato varieties, a lot of light is needed. HPS would use too much energy and generate excessive heat, and so it was decided to use LED. We felt that the Hyperion 3k fixture offered the best solution, using the same number of LED fixtures as in the HPS section of the greenhouse, but delivering over 40% more light and using 20% less energy”, says Dr. Lukas Scholz, Managing Director of Gemüsering Greenhouse Operations.

Hyperion 3k fixtures utilise active air cooling to enable high output and efficiency in a compact design, that is easy to install and maintain. It is important to be able to efficiently deal with the heat from 1000W of LED power but extensive testing, combined with 3 years monitoring in the greenhouse have shown Hyperion’s air cooling to be very reliable and efficient. The installation at Zorbau, measured at over 250 µmol/s/m², is one of the highest intensity 100% LED installations in W. Europe.

With the crop new fully grown and the first harvests made, Hyperion Director Jonathan Barton caught up with Head Grower Thomas Henniger to get his first impressions of growing under full LED. 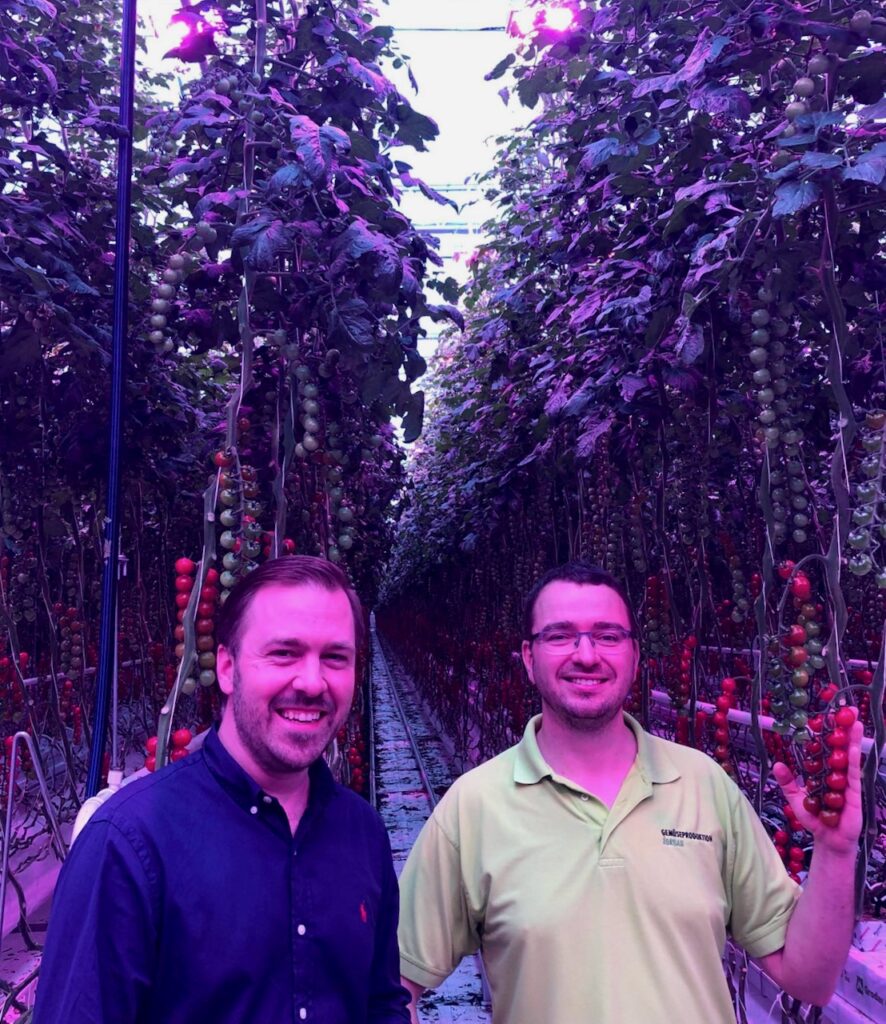 What made you choose LED for the greenhouse extension?
“Our vision was to improve quality and saving energy costs by using the future technology in artificial light. We decided for a full LED installation and against a hybrid installation with SON-T because we believe that full LED will be the future. We don’t want to waste time and decided for gaining experience in growing tomatoes under full LED conditions.”

Have you made any changes to the steering of the crop under 100% LED?
“One of the general advisers says to steer with 1-2 degree higher average temperature comparing to SON-T. We got good results in growing with this setting. Depending on the growing situation we use sometimes more and sometimes less lighting hours comparing to SON-T. Because of the improved light level, a higher plant density is possible but always depends on the variety.”

You have grown many new tomato crops under HPS, how does the plant growth compare under LED?
“We see under LED more stability in flowering and the leaf length in general is a bit shorter. That makes a nice generative balance and results in a higher quality of the fruits. Directly under the LED modules you can see some more predisposition for leaf points, comparable with deep reflectors in SON-T. For a good climate under LED, more heat is needed. But because of the less heating influence from LED modules comparing to SON-T, the climate is more stable under LED if you are able to use an energy screen. With only 5% amount of white light in our LED installation in dark winter days without light from outside, to harvest the right color of tomatoes is a challenge.”

Have the first tomatoes met the quality you expect?
“Yes, we can be really satisfied with the fruit quality we reach now. Before the first harvest naturally we were a bit nervous if everything goes like we expected but now we see for sure the potential to reach a higher quality level compared to SON-T.”