Home » News » The first side by side trial of LED vs HPS in Germany at Gemüsebau Steiner: Interview with head grower Andrei Mihai

The first side by side trial of LED vs HPS in Germany at Gemüsebau Steiner: Interview with head grower Andrei Mihai 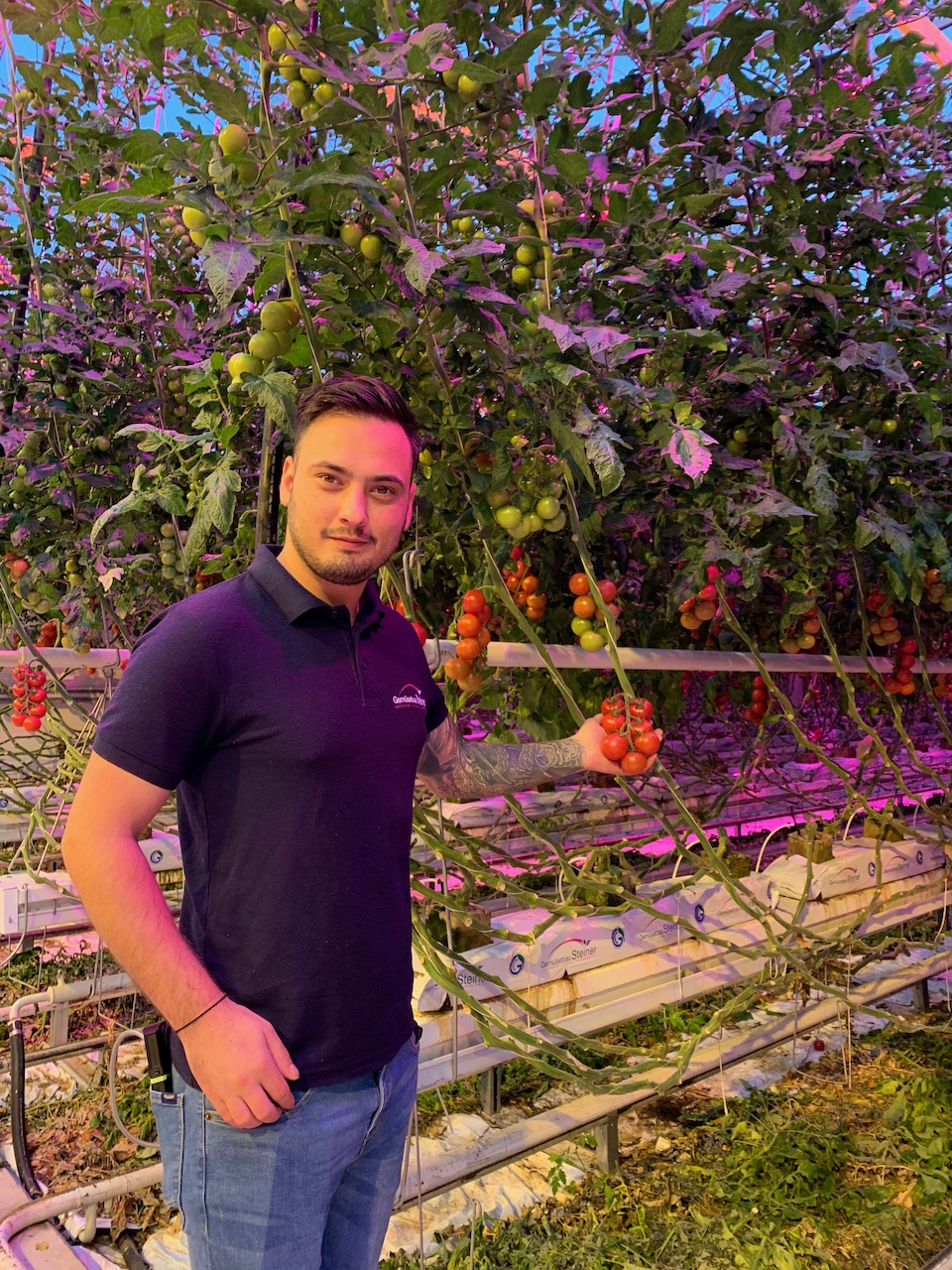 In Autumn 2019 Gemüsebau Steiner installed Hyperion in Kirchweidach, replacing the existing 1000W HPS fixtures with LED fixtures in an area of 5,000m2. This was the first 100% LED tomato installation in Germany. More importantly, this was a unique trial comparing tomato growth in adjacent sections of the same greenhouse under HPS and LED light. Maarten Klein, Head Agronomist at Hyperion Grow Lights, met with Andrei Mihai, Head Grower at Gemüsebau Steiner to discuss the first results of this trial.

What light levels do you have in the HPS and LED areas of your greenhouse?

How easy was it to install the LEDs?

We had HPS supplementary lighting installed in our 2-ha tomato greenhouse. We replaced HPS with LEDs in one of the four compartments, so the LED area was approximately 5000 m². It was very easy to replace the HPS as the Hyperion LED fixtures are designed to reuse the same electrical cabling and connectors. The replacement was 1:1, mounting fixtures to the same positions on the trellis, so it was a quick plug-and-play replacement. The rest of the greenhouse (1.5 ha) still had the HPS lights – this gave us an opportunity to make a direct comparison between the HPS and LEDs in the same greenhouse.

Did you see tomato yield differences measured between these compartments?

Yes, at similar light intensity it is possible to get a higher yield with LED as well as power savings. The LED lights had a red, blue, white and far red spectrum which is a general spectrum recommended by Hyperion for tomatoes and other crops, it has all the necessary components of PAR light plus some far red.

Did you find differences in the crop between LED and HPS?

The plants under LED were more generative. With HPS lamps, the leaves of the plants are growing bigger and vegetative even with higher greenhouse air temperature. Under the LED lights the plants were very generative with lower temperature. The crop in general is stronger under LED than under HPS. We have also measured the truss settling and under the LED there was 1 truss less settled but more yield due to bigger fruit weight.

What was the difference in fruit weight?

Trialing LED in such a large area gave us possibility to have a better overview on all trusses produced under LED and HPS. The trusses under LED were bigger and stronger, the average fruit weight was higher under LED. Another good aspect was that there were no split fruits under LED, which is normally the case with HPS.

How did the Brix level and taste compare?

It was warmer under the HPS lamps, therefore the fruits had higher temperature resulting in slightly higher Brix level. However, in my opinion, the taste was better under LED than HPS, therefore Brix level is not the key measure. Our customers judge the quality of tomatoes on taste rather than on Brix level, therefore our main objective is to get the taste right.

Were there any differences in climate control and greenhouse temperature?

In the LED area it was a little bit colder than in HPS area, because LEDs do not emit radiant heat. Therefore, we adjusted the climate s from time to time by increasing temperature in the compartment. While under HPS lamps it is more difficult to maintain a proper climate, under the LED it was a lot easier because we did not have the problem of extra heat like under HPS.

What were the lighting hours of LED compared with HPS?

Around 2100 annual lighting hours for both. The LED trial was part of our 2-ha greenhouse and we gave the same lighting hours in both HPS and LED areas.

Were you happy with the LED compartment and what main differences did you experience?

The biggest difference is less heat under LEDs, and this ensures a better control of growing. The plants are growing better under LED. They are more generative with higher fruit weight and a better taste. And most importantly, we see significant power savings under LEDs compared with HPS.

What was the difference in power consumption?

We expected the LED lights to consume 35% less electrical power compared with HPS while providing the same amount of light. The Hyperion LEDs proved to be even more efficient and consumed 40% less power than our 1000W HPS fixtures, whilst delivering the same light intensity. Electricity in Germany is very expensive, and I calculate that the LED fixtures, despite being more expensive to buy than HPS, will pay back within 2-3 years on energy savings and afterward bringing pure profit because of the lower operational costs.

What will be the result of this trial? Does Gemüsebau Steiner have future plans for LEDs?

Our company has always been looking for sustainability, improvements and reducing costs. Steiner uses geothermal water and is also C02-neutral, the LED concept fits our philosophy very well. Therefore, we will invest further in LED. 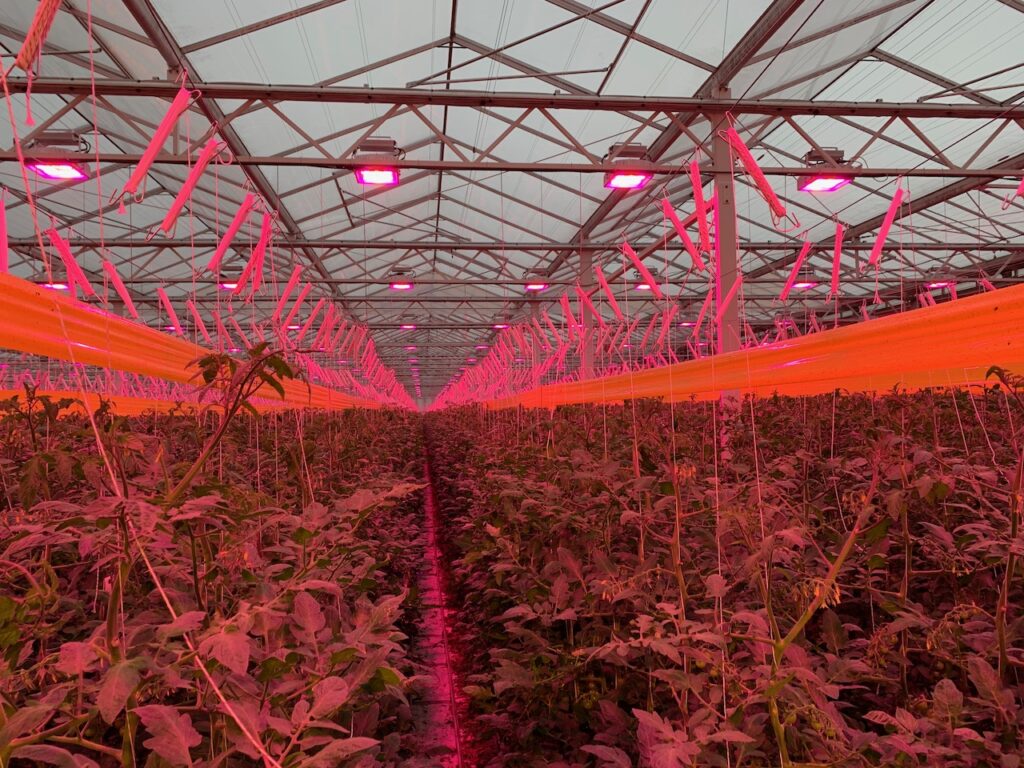