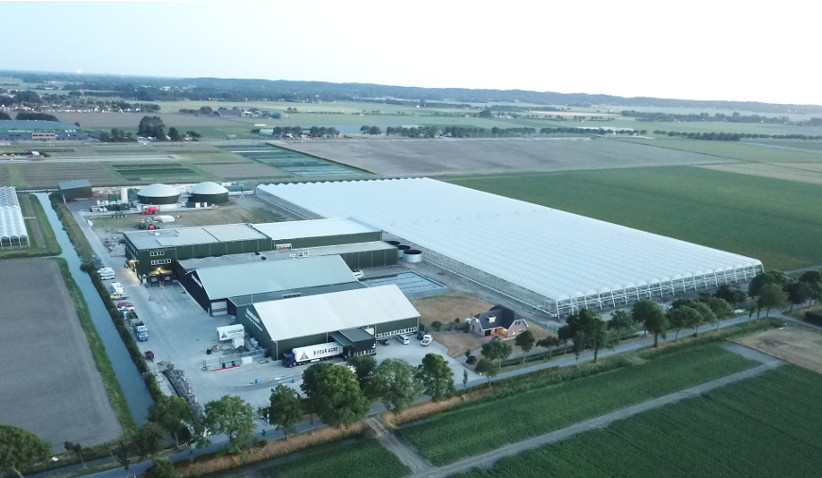 In recent years, B-Four Agro has developed into a specialist producer of lettuce, grown outdoors, mainly to supply the vegetable processing industry. The new glasshouse will mark a switch to indoor horticulture where lettuce will be produced hydroponically. B-Four Agro has tested hydroponic growing methods and is now investing, in a new greenhouse facility to be run under a new subsidiary company, B4Hydrogrow B.V.

B4Hydrogrow’s’s aim is to get the largest yield and the highest-quality lettuces from every square metre of growing space. To do this, it will invest heavily in automated production, an advanced growing system and 100% LED lighting. LEDs give off much less heat than SON-T lamps and are up to 40% more energy efficient, allowing a higher light level than would be possible using SON-T lamps. The specific wavelengths of light available with the Hyperion grow light can result in a denser, more compact crop, with better colouration.

“When we looked at lighting for our new greenhouse project we decided to go with 100% LED as the most advanced, long term option. We wanted an LED lighting solution that offered flexible light spectrums, simple design, low shading and a good commercial return on investment. Plessey’s experience with their LEDs at lettuce grower Johan Desmet gave us confidence in the high quality of these lights.”

“Using LED lighting in lettuce growing is proven to be very successful, due to the fact that SON-T emits a lot of radiant heat”, says Hyperion’s Head Agronomist, Maarten Klein, “This warms the plant temperature to levels which are unfavorable for quality and sturdy lettuce crops. With the use of the Hyperion LED, the grower can maximize production capacity by using artificial light in times when greenhouse temperature is critical.”

“With a light output of over 1750 micromoles, the new Hyperion is equivalent to a traditional 1000W SON-T but with more efficient and productive light spectrums. This, in addition to easy plug and play installation on the trellis , energy saving of around 40%, minimal shading, replaceable components for long life and competitive commercial proposition, made Hyperion a great choice for B4.”